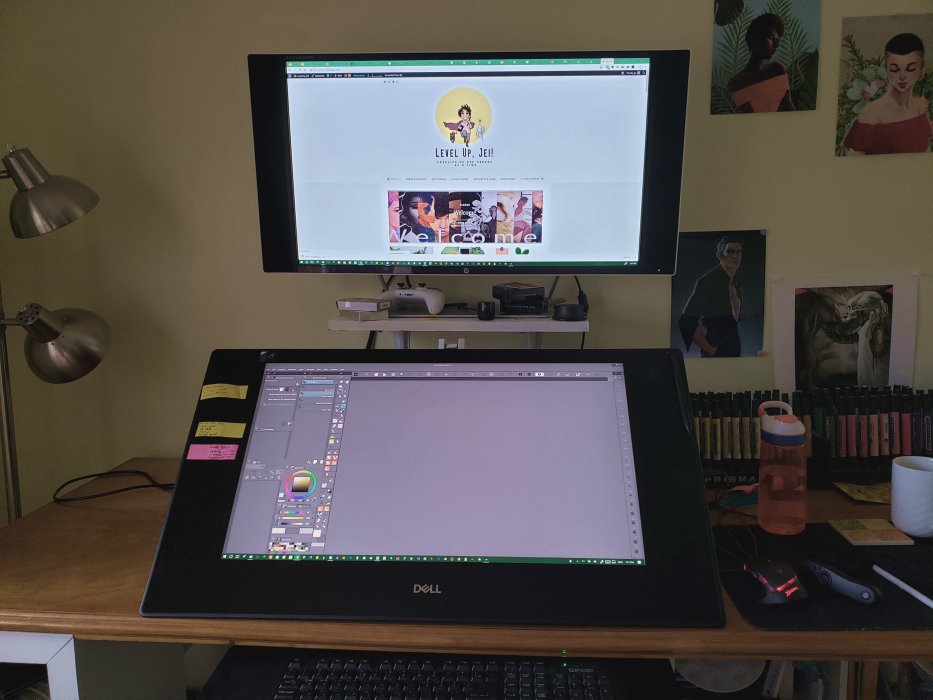 I 100% do NOT recommend anyone get the Dell Canvas anymore. It is still an excellent device for all the reasons listed below but it seems like my fears came true, Dell seems to have discontinued the Dell Canvas 27 line. If you can get it for next to nothing go for it but considering if you have any hardware issues/etc you may be SOL there are better, more reliable options.

Huion, XP-Pen, and more have new tablets out that only seem to be getting better so they may be good Wacom alternatives.

RIP Dell Canvas 27 (I’ll love you until you stop working!!!)

I’ve had the Dell Canvas more than a full year now and I have some feelings about it. A lot of feelings.  Hands down this is the best hardware purchase I have ever made for art and the most expensive. For the mount, arm, and Dell it came out just over 2k. I wanted to get more serious about my art and even though I had a good pen enabled monitor with the solid, Ugee 2150. I wanted something with a larger screen, better display capabilities and touch. The Dell delivered in every aspect.

I use my Dell almost daily for 2 or more hours- painting/drawing, gaming, web browsing, video editing, etc. One of the best and most used feature has to be touch. It works almost 100% of the time and the only times it didn’t I think was an issue on Clip Studio Paint’s end (which thankfully seems to have been addressed as it hasn’t happened in months!). I never realize how much I use it until I switch to another person’s setup without touch or use an application that doesn’t allow for all the touch gestures like rotation, etc.

From what I’ve heard and read touch can be hit or miss with devices like Wacom’s Cintiqs and something that a person has to pay additionally for. While with Dell you can turn off touch if you want but it doesn’t cost you extra to have it.

The Dell Canvas pen feels great in hand- not too heavy, not too light, nor too short or long.  When not in use it usually hangs magnetically on the front bezel of my Canvas. It does a great job of staying put despite the near completely upright resting position. The Canvas software as well as Windows software that handles the pressure are fairly limited but I’m easily able to get a full range of marks as is. Where I place my pen tip is where the mark goes. I’ve experienced little to no parallax and lag mainly due to large brush sizes.

After hours and hours of use my pen still looks and works great with some slight scuffing toward the back end and the tip still works well without needing to be replaced. My screen as well shows very little signs of use but could probably use a good wipe-down.

Overall I would undoubtedly and fully recommend the Dell Canvas to anyone. As is it is an excellent device comparable and imho surpassing Wacom  comparable Cintiqs for the price and features.

Going forward there are some areas I think Dell could improve on. The biggest has to be that totem. In theory it sounds like a great device but really- it’s trash. I say that with a heart full of love for my Dell but that totem is straight trash. If you have your Dell in an upright position it slides off (preferably into the trash but likely on your toes for further insult).  There are bezels the size of Texas (griping about those in a sec!) and the totem does nothing on them- nothing. It can only be used on screen and then there is some weird muscle memory things going on *if* your application even works with it. Like do I squeeze it? Hit it? Shake it? Rub its back???? So my totem sits on my desk taking up space and collecting dust. And it isn’t just me. From what I could find online (another upcoming gripe!) no one seems to use or like the totem- no one.

My other pet peeve with the Dell has got to be those Texas sized bezels. Other than holding my pen (there seems to be just two strong magnets only in the top right and left corners) and my sticky notes- those bezels are just taking up precious desk space. More than just useless they are in the way.  They make it really awkward to have my keyboard next to it at times on my left and my mouse on the right. Literally I feel my arms stretching out to reach one or the other some times- and it isn’t because of the screen it’s the bezels.

In the future I hope Dell takes more design cues from the Surface line- the Studio has nearly no bezel and it works beautifully. It would be great if the pen could stick to the side or even behind. If Dell is determined to keep the bezels then I wish they would make them more useful. They could magnetize them and have accessories like Wacom’s express key remote or a notch for an improved totem, speakers(?), just about anything other than what they currently do.

Finally, my other concern is the lack of anything about or for the Dell Canvas. It kind of feels like an abandoned product in that there is very little to no hype. I love my Dell and yet I’ve heard little to nothing about it online that I didn’t seek out for myself. Where is the social media push or lively online forums to connect users and get people talking about their devices and how they use them?  I’ve gotten several questions from interested artists that couldn’t find info or wanted more personal reviews- and I don’t work for Dell nor get paid by them.  I’ve happily answered though because I love using my Canvas and hope fellow artists find something they love as well- even if it isn’t a Dell. Most of the cool tricks I’ve picked up I found on my own because no one really knows much or has a Canvas. Like the fact that Galaxy s-pens work on the Canvas or that the Canvas pen works on those devices. Or like the fact that the Clip Studio Paint tabmate controller works well with the Dell as does a Nintendo Switch controller (from what I found online).  It’s such a shame that such an excellent device isn’t getting the attention and push it deserves.